The other people that David left to Solomon to deal with are also notable because it is clear that Solomon did not exactly do what David asked. In 1 Kings 2:9 David specifically told Solomon to bring Shimei’s head down to the grave in blood, but Solomon allows him to live another three years. 1 Kings 2:36-46 relates the account of how Solomon dealt with Shimei. The following quote relates King David’s instructions.

1 Kings 2:8 And, behold, there is with thee Shimei the son of Gera, the Benjamite, of Bahurim, who cursed me with a grievous curse in the day when I went to Mahanaim; but he came down to meet me at the Jordan, and I swore to him by the Lord, saying: I will not put thee to death with the sword. 9 Now therefore hold him not guiltless, for thou art a wise man; and thou wilt know what thou oughtest to do unto him, and thou shalt bring his hoar head down to the grave with blood.' (JPS) (Emphasis added) 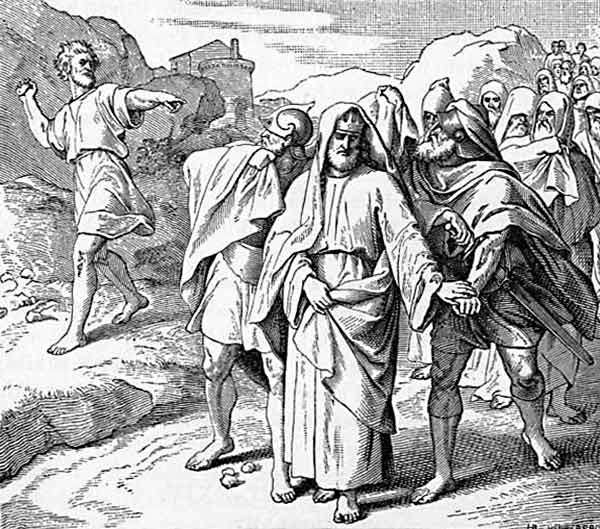 2 Samuel 16:5 And when king David came to Bahurim, behold, there came out thence a man of the family of the house of Saul, whose name was Shimei, the son of Gera; he came out, and kept on cursing as he came. 6 And he cast stones at David, and at all the servants of king David; and all the people and all the mighty men were on his right hand and on his left. 7 And thus said Shimei when he cursed: 'Begone, begone, thou man of blood, and base fellow; 8 the Lord hath returned upon thee all the blood of the house of Saul, in whose stead thou hast reigned; and the Lord hath delivered the kingdom into the hand of Absalom thy son; and, behold, thou art taken in thine own mischief, because thou art a man of blood.' (JPS) (Emphasis added)
(Begins at 2 Samuel 16:20 in many translations)

For one reason or another David did not put Shimei to death. Certainly, the subject came up because David’s troops wanted to kill him right then. However, David assured Shimei that he would not execute him. However, when he turns the kingdom over to Solomon that is what he requests. Evidently, David’s promise not to kill Shimei only extended to himself.

Rather than kill Shimei as King David instructed, Solomon placed Shimei on house arrest. But three years later, personal events caused Shimei to venture out of the city at which point Solomon had him executed.

1 Kings 2:36 Then the king sent for Shimei and said to him, “Build yourself a house in Jerusalem and live there, but do not go anywhere else. 37 The day you leave and cross the Kidron Valley, you can be sure you will die; your blood will be on your own head.”
38 Shimei answered the king, “What you say is good. Your servant will do as my lord the king has said.” And Shimei stayed in Jerusalem for a long time.
39 But three years later, two of Shimei’s slaves ran off to Achish son of Maakah, king of Gath, and Shimei was told, “Your slaves are in Gath.” 40 At this, he saddled his donkey and went to Achish at Gath in search of his slaves. So Shimei went away and brought the slaves back from Gath.
41 When Solomon was told that Shimei had gone from Jerusalem to Gath and had returned, 42 the king summoned Shimei and said to him, “Did I not make you swear by the Lord and warn you, ‘On the day you leave to go anywhere else, you can be sure you will die’? At that time you said to me, ‘What you say is good. I will obey.’ 43 Why then did you not keep your oath to the Lord and obey the command I gave you?”
44 The king also said to Shimei, “You know in your heart all the wrong you did to my father David. Now the Lord will repay you for your wrongdoing. 45 But King Solomon will be blessed, and David’s throne will remain secure before the Lord forever.”
46 Then the king gave the order to Benaiah son of Jehoiada, and he went out and struck Shimei down and he died.
The kingdom was now established in Solomon’s hands. (NIV) (Emphasis added)

Deuteronomy 29:17 lest there should be among you man, or woman, or family, or tribe, whose heart turneth away this day from the LORD our God, to go to serve the gods of those nations; lest there should be among you a root that beareth gall and wormwood; 18 and it come to pass, when he heareth the words of this curse, that he bless himself in his heart, saying: `I shall have peace, though I walk in the stubbornness of my heart — that the watered be swept away with the dry'; 19 the LORD will not be willing to pardon him, but then the anger of the LORD and His jealousy shall be kindled against that man, and all the curse that is written in this book shall lie upon him, and the LORD shall blot out his name from under heaven; 20 and the LORD shall separate him unto evil out of all the tribes of Israel, according to all the curses of the covenant that is written in this book of the law. (JPS) (Emphasis added)