1 Kings 2:5 “Now you yourself know what Joab son of Zeruiah did to me — what he did to the two commanders of Israel’s armies, Abner son of Ner and Amasa son of Jether. He killed them, shedding their blood in peacetime as if in battle, and with that blood he stained the belt around his waist and the sandals on his feet. 6 with him according to your wisdom, but do not let his gray head go down to the grave in peace. (NIV) (Emphasis added)

The way Solomon dealt with Joab is of great interest because he had him executed at the altar right at the tent of meeting. It is important to note that this incident occurred at the tent-tabernacle that David pitched in Jerusalem, so this happened in front of the real Ark. This act effectively desecrated the tabernacle. 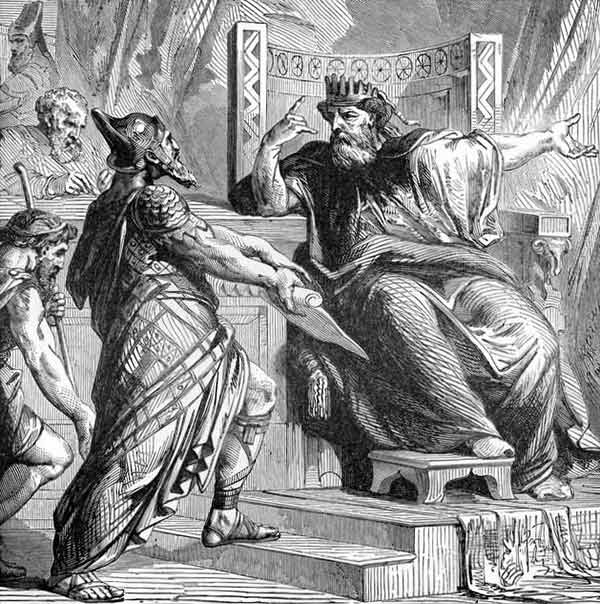 Joab rebukes King David.
2 Samuel 24:3 And Joab said to the king, “Now may the Lord your God add to the people a hundred times more than there are, and may the eyes of my lord the king see it. But why does my lord the king desire this thing?”
From Henry Davenport Northrop's, "Treasures of the Bible," 1894.

1 Kings 2:27 So Solomon thrust out Abiathar from being priest unto HaShem; that the word of HaShem might be fulfilled, which He spoke concerning the house of Eli in Shiloh. 28 And the tidings came to Joab; for Joab had turned after Adonijah, though he turned not after Absalom. And Joab fled unto the Tent of HaShem, and caught hold on the horns of the altar. 29 And it was told king Solomon: 'Joab is fled unto the Tent of HaShem, and, behold, he is by the altar.' Then Solomon sent Benaiah the son of Jehoiada, saying: 'Go, fall upon him.' 30 And Benaiah came to the Tent of HaShem, and said unto him: 'Thus saith the king: Come forth.' And he said: 'Nay; but I will die here.' And Benaiah brought back word unto the king, saying: 'Thus said Joab, and thus he answered me.' 31 And the king said unto him: 'Do as he hath said, and fall upon him, and bury him; that thou mayest take away the blood, which Joab shed without cause, from me and from my father's house. (JPS) (Emphasis added)

King Solomon's wise decision was to have Joab slain right in the tent of the Lord - an act that desecrated the tent that David pitched as well as everything and everyone in it.

Under the Torah, a corpse is one of the greatest causes of uncleanness and corpse uncleanness is known as one of the "Fathers of Uncleanness." In fact, the Levites were not ordinarily allowed to come into contact with a corpse except in the case of immediate family. Every place where the corpse was and everything that came into contact with it would be defiled and desecrated. If a corpse is in a tent everything and everyone in that tent are unclean. As a minimum, it would require 7 days of purification to resume the use of this altar or for any of the people on hand to purify themselves and this would also have to include immersion.

As a scriptural case in point, the story of Athaliah and Joash appears in 2 Chronicles 22:10 – 23:15. Athaliah had taken control of Judah after the death of her son King Ahaziah. When Joash, the only heir to the throne that was not killed by Athaliah became old enough to take control of the kingdom that was rightfully his, Jehoiada the priest helped restore the kingdom to him. During the uproar of establishing Joash as king, Athaliah took refuge in the temple to escape certain execution. Nevertheless, Jehoiada did not have her struck down in the temple, but had her extracted from the temple before she was put to death.

2 Chronicles 23:12 And when Athaliah heard the noise of the people running and praising the king, she came to the people into the house of HaShem; 13 and she looked, and, behold, the king stood on his platform at the entrance, and the captains and the trumpets by the king; and all the people of the land rejoiced, and blew with trumpets; the singers also played on instruments of music, and led the singing of praise. Then Athaliah rent her clothes, and said: 'Treason, treason.' 14 And Jehoiada the priest brought out the captains of hundreds that were set over the host, and said unto them: 'Have her forth between the ranks; and whoso followeth her, let him be slain with the sword'; for the priest said: 'Slay her not in the house of HaShem.' 15 So they made way for her; and she went to the entry of the horse gate to the king's house; and they slew her there. (JPS) (Emphasis added)

According to the Torah, a dead body in the sanctuary desecrates it. Furthermore, priests were never to go near the dead - not even the dead of their own families with certain exceptions. The reason for this is that it made them ceremonially unclean and everything they touched would become unclean. According to the Mishnah, corpse uncleanness is one of the fathers of uncleanness (Kelim 1:1 – 1:5).

Ezekiel 9:4 And the Lord said unto him: 'Go through the midst of the city, through the midst of Jerusalem, and set a mark upon the foreheads of the men that sigh and that cry for all the abominations that are done in the midst thereof.' 5 And to the others He said in my hearing: 'Go ye through the city after him, and smite; let not your eye spare, neither have ye pity; 6 slay utterly the old man, the young man and the maiden, and little children and women; but come not near any man upon whom is the mark; and begin at My sanctuary.' Then they began at the elders that were before the house. 7 And He said unto them: 'Defile the house, and fill the courts with the slain; go ye forth.' And they went forth, and smote in the city. (JPS) (Emphasis added)

Kelim 1:1:A. The Fathers of Uncleanness are:

(4) A Leper during days of counting

(5) Sin offering water of Insufficient quantity to be sprinkled.

B. These render man and vessels unclean by contact, and earthenware vessels become unclean by sharing the same airspace. (The Mishnah)