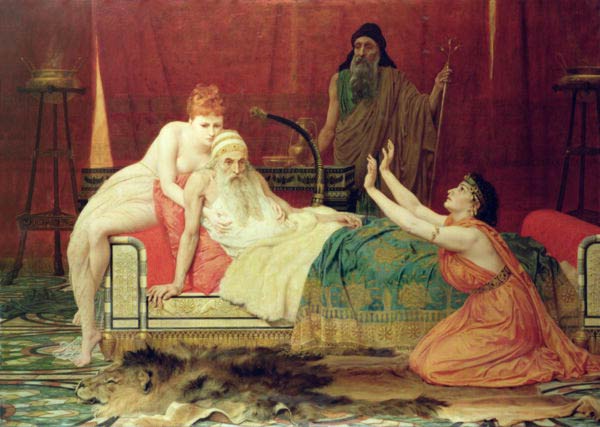 As the prime mover of events surrounding Solomon's ascension to the throne of Israel, Nathan the Prophet obviously cooked up a grand clandestine and treacherous stratagem in alliance with Bathsheba to install Solomon on the throne. It is evident that Nathan was motivated out of his desire to maintain his important position in the royal court that would have been in jeopardy had Adonijah succeeded in his rise to power.

There obviously was good reason for Nathan to be concerned about his position because this was not the first time that Nathan prophesied something that was not the word of the Lord. Another recorded instance of Nathan prophesying out of his own heart occurred when David began thinking of building the temple.

2 Samuel 7:1 And it came to pass, when the king dwelt in his house, and the Lord had given him rest from all his enemies round about, 2 that the king said unto Nathan the prophet: 'See now, I dwell in a house of cedar, but the ark of God dwelleth within curtains.' 3 And Nathan said to the king: 'Go, do all that is in thy heart; for the Lord is with thee.' 4 And it came to pass the same night, that the word of the Lord came unto Nathan, saying: 5 'Go and tell My servant David: Thus saith the Lord: Shalt thou build Me a house for Me to dwell in? 6 for I have not dwelt in a house since the day that I brought up the children of Israel out of Egypt, even to this day, but have walked in a tent and in a tabernacle. 7 In all places wherein I have walked among all the children of Israel, spoke I a word with any of the tribes of Israel, whom I commanded to feed My people Israel, saying: Why have ye not built Me a house of cedar? (JPS) (Emphasis added)

Considering the calamities that David normally experienced when he did not follow the word of the Lord, he might have been especially displeased with a prophet that did not carefully tell him what the Lord had said. In the case of Adonijah, however, Nathan revealed no prophecy at all, but simply a shrewdly devised self-serving scheme.

Nathan was not invited to Adonijah's feast and was feeling spurned and alarmed that his position in the royal court is apparently imperiled. Therefore, he concocted a scheme to put Solomon on the throne, thus insuring an important position for himself if his plan succeeded. Unfortunately for Nathan, the plan has some nasty long-term consequences that he might not have considered. At the end of the following passage it is noted that this prophet will not be included in the register of Israel and this is one way of saying that this person is damned.

Ezekiel 13:1 And the word of HaShem came unto me, saying: 2 'Son of man, prophesy against the prophets of Israel that prophesy, and say thou unto them that prophesy out of their own heart: Hear ye the word of HaShem: 3 Thus saith the Lord GOD: Woe unto the vile prophets, that follow their own spirit, and things which they have not seen! 4 O Israel, thy prophets have been like foxes in ruins. 5 Ye have not gone up into the breaches, neither made up the hedge for the house of Israel, to stand in the battle in the day of HaShem. 6 They have seen vanity and lying divination, that say: HaShem saith; and HaShem hath not sent them, yet they hope that the word would be confirmed! 7 Have ye not seen a vain vision, and have ye not spoken a lying divination, whereas ye say: HaShem saith; albeit I have not spoken? 8 Therefore thus saith the Lord GOD: Because ye have spoken vanity, and seen lies, therefore, behold, I am against you, saith the Lord GOD. 9 And My hand shall be against the prophets that see vanity, and that divine lies; they shall not be in the council of My people, neither shall they be written in the register of the house of Israel, neither shall they enter into the land of Israel; and ye shall know that I am the Lord GOD. 10 Because, even because they have led My people astray, saying: Peace, and there is no peace. (JPS) (Emphasis added)

Recall that the word for peace in Hebrew is Solomon or Shelomoh and notice that the word is strangely capitalized here. Therefore, Ezekiel 13:10 might have a slightly different meaning than has traditionally been attributed to it. For example, it would be fair to translate the verse something like the author’s paraphrase: they have led My people astray, saying: Shelomoh, and there is no Shelomoh. Recall also that this is the title of the true Messiah.

Ecclesiastes 4:13 Better is a poor and wise child than an old and foolish king, who knoweth not how to receive admonition any more. (JPS) (Emphasis added)