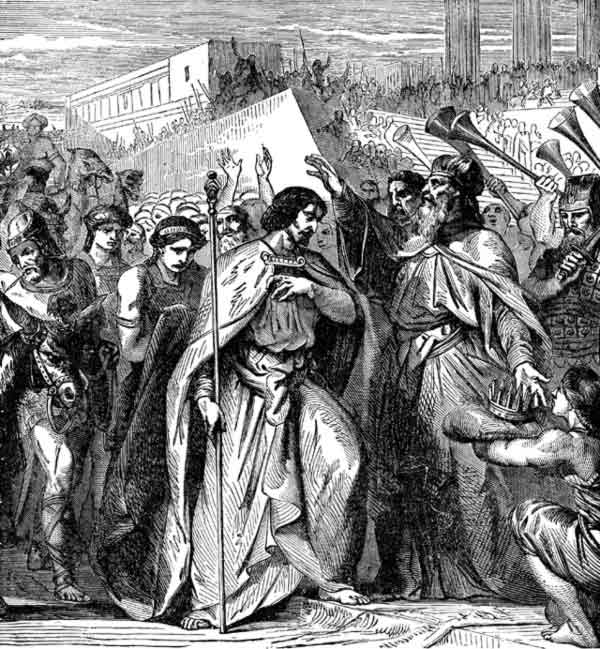 While traditional interpretation holds that Adonijah was an upstart or usurper, scripture never actually supports that view. In fact, it is impossible that Solomon could have been the promised successor in 1 Chronicles 17:11 or 2 Samuel 7:12 for a plethora of reasons the most obvious of which is that David, Bathsheba and Nathan actually installed Solomon and it was obviously no act of God.

1 Chronicles 17:11 And it shall come to pass, when thy days are fulfilled that thou must go to be with thy fathers, that I will set up thy seed after thee, who shall be of thy sons; and I will establish his kingdom. (JPS) (Emphasis added)

On that note, this material should clearly be reexamined to see if the proponents of the conventional view have overlooked something. In 1 Kings 1, more of this story is imparted and scripture reveals a few more particulars of the story of Adonijah and Solomon’s rise to the throne.

1 Kings 1:9 And Adonijah slew sheep and oxen and fatlings by the stone of Zoheleth, which is beside En-rogel; and he called all his brethren the king's sons, and all the men of Judah the king's servants; 10 but Nathan the prophet, and Benaiah, and the mighty men, and Solomon his brother, he called not. (JPS) (Emphasis added)

1 Kings 1:11 Then Nathan spoke unto Bath-sheba the mother of Solomon, saying: 'Hast thou not heard that Adonijah the son of Haggith doth reign, and David our lord knoweth it not? 12 Now therefore come, let me, I pray thee, give thee counsel, that thou mayest save thine own life, and the life of thy son Solomon. 13 Go and get thee in unto king David, and say unto him: Didst not thou, my lord, O king, swear unto thy handmaid, saying: Assuredly Solomon thy son shall reign after me, and he shall sit upon my throne? why then doth Adonijah reign? 14 Behold, while thou yet talkest there with the king, I also will come in after thee, and confirm thy words.' (JPS) (Emphasis added)

Considering the previous passages carefully, it is obvious that due to his alarm at not being invited to Adonijah's party Nathan contrives a stratagem to install Solomon on the throne. Since Solomon was not invited either, Nathan conspires with Bathsheba. To put it another way, this is obviously a lie and it is evident that Nathan is cooking up an artless scheme here. Nearly anybody should see through this unsophisticated ruse immediately.

Notice that Nathan tells Bathsheba that she needs to talk to King David in order to preserve her life and that of her son and moreover notice that Nathan will come in and confirm her words. This is a very clever tactic for confirming a lie. It is evident that the first Bathsheba ever heard of this was from Nathan and certain that the first King David heard of it was from Bathsheba.

As a pertinent side note, consider that this is written in the Bible, the infallible word of God. While everything in the Bible must necessarily be true, it is a conspicuous fact that this segment records the dialog of the characters; therefore, their lies are faithfully recorded. In faithfully quoting the lying words of the characters - and notice that there are quotation marks - the Bible remains absolutely true.

Micah 3:5 Thus saith the Lord concerning the prophets that make my people to err; that cry: 'Peace', when their teeth have any thing to bite; and whoso putteth not into their mouths, they even prepare war against him: (JPS)
(Emphasis added)

The meaning of these types of passages may be somewhat different than that which is traditionally ascribed to them. Notice that in the JPS translation, the word “Peace” is capitalized and recall that the name Solomon means peace. Most word-for-word translations render the word Peace that appears in this passage capitalized as one would treat a proper name. There really would be no reason to capitalize the plain word peace. Recall that the name Solomon means peace.