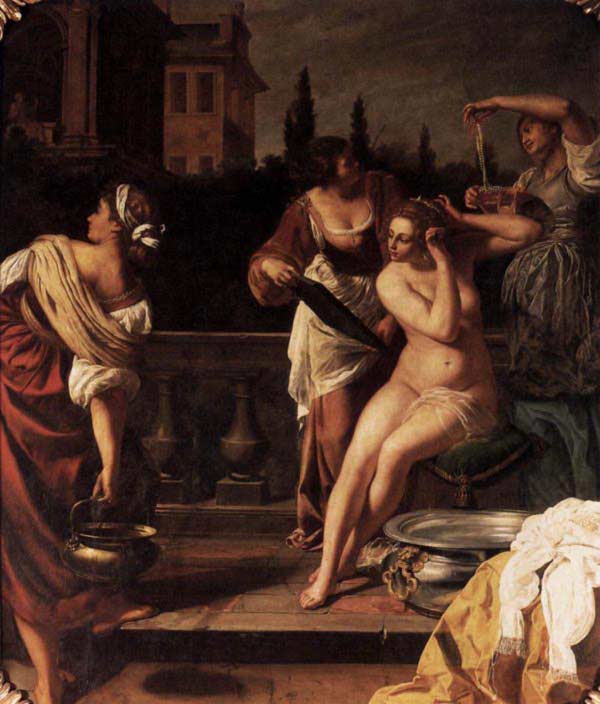 Bathsheba was the wife of a Hittite, one of the peoples that the Torah forbade for intermingling. Interestingly enough any children produced from this marriage would have been a mamzer if in fact Bathsheba were Jewish. From scripture, it is not abundantly clear if Bathsheba was Jewish, but careful consideration does result in a supported conclusion. In normal Jewish genealogical practice, it is necessary that the mother be Jewish for offspring to be Jewish. The Torah does contain mentions of Bathsheba's father, but no clear genealogy. Furthermore, 2 Samuel 11:3 names her father Eliam while 1 Chronicles 3:5 lists him as Ammiel. Perhaps there was some question about her parentage.

There is a general theory promulgated by some that Bathsheba's father must have been one of the scouts that explored the land of Canaan back in the days of Moses and Joshua (Numbers 13:12 & 14:36-38). This is because the name Ammiel is listed as one of the scouts; however, this would require that he was more than 400 years old when Bathsheba was conceived, so there may be problems with that theory. We can conclude this because we know that the foundation of the temple was laid in the 480th year after the Children of Israel came up out of Egypt (1 Kings 6:1). Solomon would have been 16 during the year that the foundation was laid.

It is apparent that two different names are listed as Bathsheba's father and yet the Bible is the infallible word of God, so this leaves a puzzle. This particular issue has not received a great deal of attention; but it is worthwhile to explore a plausible explanation. There are several scenarios that could explain this.

Consider the possibility that Bathsheba's parents had been married some time and wanted children very badly, but to no avail. Then consider the possibility that in order to conceive they experimented outside their marriage in ways similar to the case of Abraham many years before (Genesis 16); however in this case, the wannabe father, the husband of her mother, was sterile and another man sired her. Then, as one can see, as far as Bathsheba would be concerned her father was the man that raised her, the husband of her mother. But he would not be her biological father, a man she may have never known or even known about. Perhaps there was only one instance of passion and this scenario could easily explain a listing of two fathers.

There is another scenario recorded in the Bible that could also produce the phenomenon of a person having two fathers, but in this case, the scheme was not successful. Consider the case of Solomon's older brother that died when he was one week old. If the plan that David and Bathsheba devised had worked, Uriah would have thought that he was the child's father and her affair with David would have been covered up. In that event, it is likely that David and Bathsheba would have never told anyone including the child the truth about the conception. Then both the child and Uriah would have always believed that Uriah was his father. Perhaps this stratagem was not an original idea and had been successful one generation before.

Due to many of the characteristics of Solomon that can be determined for certain, it is probable that Bathsheba was not Jewish. This may simply have been due to her alliance to Uriah. Bathsheba’s exact pedigree must be left to the Levites, however, because records and Jewish genealogical knowledge beyond that of the author would be indispensable. Some sources contend that both one’s parents must be Jews in order for the begotten to be Jewish.

Careful reading of Deuteronomy 17 renders the fact that Bathsheba - and therefore Solomon - could not possibly have been Jewish. It is reasonable to postulate that since this passage clearly delineates numerous characteristics for which Solomon is well noted and which could only pertain him that the entire passage refers to him or events involving him.

Deuteronomy 17:12 And the man that doeth presumptuously, in not hearkening unto the priest that standeth to minister there before the Lord thy God, or unto the judge, even that man shall die; and thou shalt exterminate the evil from Israel. 13 And all the people shall hear, and fear, and do no more presumptuously. 14 When thou art come unto the land which the Lord thy God giveth thee, and shalt possess it, and shalt dwell therein; and shalt say: 'I will set a king over me, like all the nations that are round about me'; 15 thou shalt in any wise set him king over thee, whom the Lord thy God shall choose; one from among thy brethren shalt thou set king over thee; thou mayest not put a foreigner over thee, who is not thy brother. 16 Only he shall not multiply horses to himself, nor cause the people to return to Egypt, to the end that he should multiply horses; forasmuch as the Lord hath said unto you: 'Ye shall henceforth return no more that way.' 17 Neither shall he multiply wives to himself, that his heart turn not away; neither shall he greatly multiply to himself silver and gold. 18 And it shall be, when he sitteth upon the throne of his kingdom, that he shall write him a copy of this law in a book, out of that which is before the priests the Levites. 19 And it shall be with him, and he shall read therein all the days of his life; that he may learn to fear the Lord his God, to keep all the words of this law and these statutes, to do them; 20 that his heart be not lifted up above his brethren, and that he turn not aside from the commandment, to the right hand, or to the left; to the end that he may prolong his days in his kingdom, he and his children, in the midst of Israel. (JPS) (Emphasis added)

Since it is obvious that most of Deuteronomy 17 must apply directly to Solomon, it is clear for all to see that the rest of this passage also regards him. Therefore, this word of prophecy related through Moses reveals a great deal more information about him than is commonly appreciated. One of those details is that he was not Jewish and that must necessarily be because Bathsheba was not Jewish.