The importance of military technology throughout history is nearly impossible to overstate and it is representative of the best technology and materials available to almost any society. The finest craftsmanship and most advanced materials of any society are found in their weapons. This is not odd because people’s lives frequently depend upon their weapons. In earlier times, nearly every member of any society was intimately connected to defense. This is not necessarily the case in industrialized countries today. Many citizens of modern industrial countries might never serve in the military or be involved in armed conflict. The ability of any person to not be directly involved in armed conflict is itself a luxury of military advancement. By and large, the absence of conscription has only been possible in modern industrial societies. 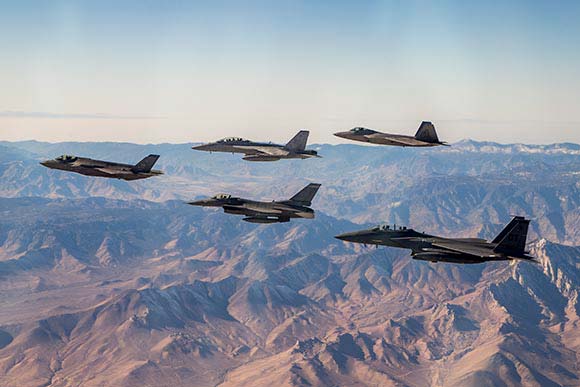 An F-35 Raptor and F-16 Fighting Falcon from Edwards Air Force Base, California, are joined by an F-15E Strike Eagle and F-22 Raptor from the 422nd Test and Evaluation Squadron out of Nellis Air Force Base, Nevada, along with a Navy F-18 Hornet from Air Test and Evaluation Squadron 31 out of Naval Air Weapons Station, China Lake, California, Dec. 13, 2018.
Photo: U.S. Air Force photo by Ethan Wagner.