Maces continued to be used for a long period of time. When metal proliferated, they were generally made of it. The first known metal to be widely used for weapons was copper and it was discovered that this metal could be alloyed with zinc to make brass or tin to make bronze. Both were much more durable and harder than plain copper. Bronze became the more prominent alloy and it can hold an edge much better than plain copper. 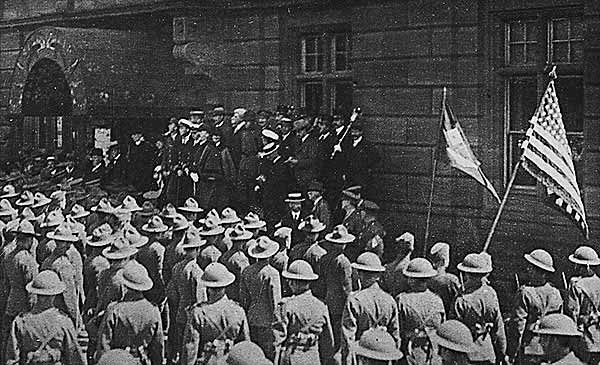 World War I parade of British and American troops at Norwich, England, on Red Cross Day.
Received in state by the lord-mayor at the Town Hall, along the front of which is a sign bearing the words:
"Welcome America."
The lord mayor's mace-bearer, with his heavy mace,
stands near the center of the picture in the rear of the group of aldermen and local dignitaries.
War Department. US Army Signal Corps.
National Archives and records Administration.
Still Picture Branch; College Park, Maryland.