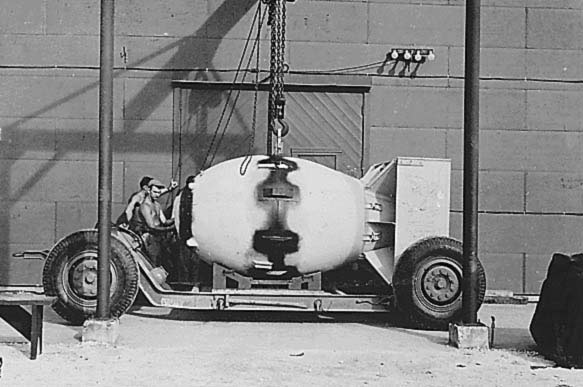 Implosion-type atomic bombs operate by surrounding fissionable material with conventional high-explosives in a strong container with the simplest form being spherical. The fissionable material must be of sufficient size to create a critical mass and is positioned as a sphere in the center of the container. The conventional explosives are positioned around this sphere and can be in the form of a shell around it or a large number of individual charges. The explosives are detonated at exactly the same time so that it causes the core of fissionable material to compress. If enough explosives are used in a strong enough container, it causes the fissionable material to compress to the point that its density becomes so great that it explodes releasing enormous amounts of energy. This type of atomic bomb can be made from plutonium-239 and a bomb of this type, named Fat Man, was first used in warfare at Nagasaki, Japan on 09 August 1945 at 11:02. It had the equivalent destructive force of 21,000 tons of TNT and exploded at 1650 feet / 503 meters altitude. 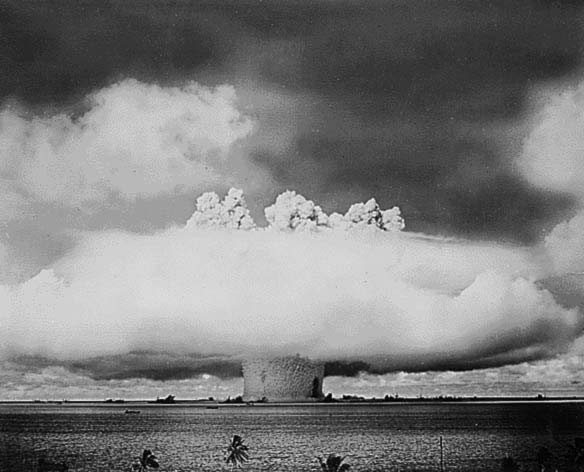 Atomic cloud during Baker Day blast at Bikini Atoll, 25 July 1946.
Operation Crossroads: Atomic cloud during Baker Day blast at Bikini Atoll in the Pacific. Here, the atomic cloud lofts over the target fleet. Sweeping out in all directions is a haze of water, steam, spray and radioactive substances obscuring the sky over all but the outer fringes of the target fleet a few minutes after the blast of 25 July 1946.
Many of the ships that were at this test had to be scuttled because of radioactive contamination. Bikini Atoll is still being cleaned up today at great expense.
Ironically, the bikini swimsuit was introduced at a Paris fashion show just 3 days later.
Photo: US Department of Defense.
Department of the Navy - Naval Photographic Center.
National Archives and Records Administration.
Still Picture Branch; College Park, Maryland.