Mostly after World War II, covert military and Central Intelligence Agency, or CIA, operations were conducted using the National Advisory Committee for Aeronautics or NACA as a cover. This soon politicized the role of the NACA, especially on the international level. Because of this and other considerations caused by the Cold War and the changing demands that came with rocket development, the NACA was reformulated into the National Aeronautics and Space Administration, or NASA, in 1958. This was intended to give NASA the appearance of being a civilian organization. 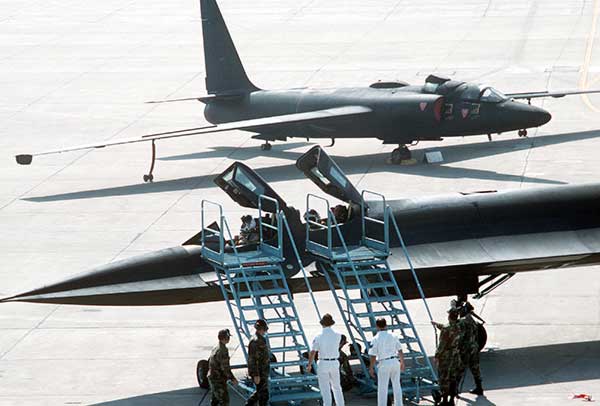 A U-2 spy plane on display in the background of a retiring SR-71 spy plane.
MAJ Terry B. Pappas, pilot, and MAJ John D. Manzi, reconnaissance officer, prepare to step down from the cockpit of their 9th Strategic Reconnaissance Wing SR-71 aircraft after landing on base for the plane's deactivation ceremony. Following the ceremony, the SR-71 will be on permanent display at the March Field Museum.
A U-2 aircraft is on display in the background.
Photo: SSGT John K. Mcdowell.
March Air Force Base, California. 2/28/1990.
National Archives and Records Administration.
Still Picture Branch; College Park, Maryland.

Civilian aviation owes far more of its existence to military development, however, because nearly all aspects of an aircraft's design were derived from elements of military research. Virtually all helicopters are military designs that were converted to civilian use. Even today, most airplanes, and especially large aircraft, are the result of military design. In the case of large commercial airliners, nearly all of them were originally a military design that was converted to civilian use. In some cases, the original design was rejected by the military while in others it is possible to find the same model of plane serving in military use.