A Wife for Adonijah 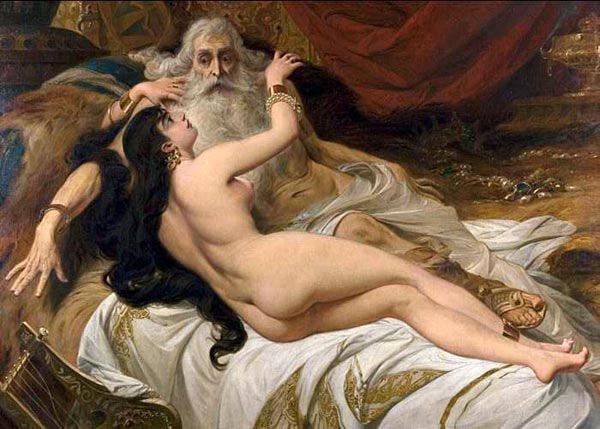 Although Adonijah was unsuccessful in claiming the throne, Solomon was gracious enough not to have him executed right away - at least not until after David died. As a condition for Solomon’s initial mercy, Solomon deemed Adonijah a worthy man. Shortly thereafter, Adonijah requested Abishag’s hand in marriage (1 Kings 2:13-25).

Abishag was the beautiful maiden that attended David while he was in his decline. The account states that David never had intimate relations with her so she was still eligible to be the bride of one of his sons. In making this request, Adonijah did not go directly to Solomon, but rather, he asked Bathsheba to approach King Solomon for him. Bathsheba agreed and therefore petitioned Solomon, her twelve-year-old son that was now the king.

1 Kings 2:13 Then Adonijah the son of Haggith came to Bath-sheba the mother of Solomon. And she said: 'Comest thou peaceably?' And he said: 'Peaceably.' 14 He said moreover: 'I have somewhat to say unto thee.' And she said: 'Say on.' 15 And he said: 'Thou knowest that the kingdom was mine, and that all Israel set their faces on me, that I should reign; howbeit the kingdom is turned about, and is become my brother's; for it was his from the Lord. 16 And now I ask one petition of thee, deny me not.' And she said unto him: 'Say on.' 17 And he said: 'Speak, I pray thee, unto Solomon the king--for he will not say thee nay--that he give me Abishag the Shunammite to wife.' 18 And Bath-sheba said: 'Well; I will speak for thee unto the king.' 19 Bath-sheba therefore went unto king Solomon, to speak unto him for Adonijah. And the king rose up to meet her, and bowed down unto her, and sat down on his throne, and caused a throne to be set for the king's mother; and she sat on his right hand. 20 Then she said: 'I ask one small petition of thee; deny me not.' And the king said unto her: 'Ask on, my mother; for I will not deny thee.' 21 And she said: 'Let Abishag the Shunammite be given to Adonijah thy brother to wife.' 22 And king Solomon answered and said unto his mother: 'And why dost thou ask Abishag the Shunammite for Adonijah? ask for him the kingdom also; for he is mine elder brother; even for him, and for Abiathar the priest, and for Joab the son of Zeruiah.' 23 Then king Solomon swore by the Lord, saying: 'God do so to me, and more also, if Adonijah have not spoken this word against his own life. 24 Now therefore as the Lord liveth, who hath established me, and set me on the throne of David my father, and who hath made me a house, as He promised, surely Adonijah shall be put to death this day.' 25 And king Solomon sent by the hand of Benaiah the son of Jehoiada; and he fell upon him, so that he died. (JPS)

Let’s take a critical look at this event. Some conclude that Solomon’s actions are defendable because Abishag could be considered part of David's harem, but are they? This point of view is derived from the story of Absalom and his nearly successful coup d'état. But, considering the scene at hand analytically, his mother came to him with a request and he swore that he would grant whatever she wished, but what did he actually do? He lied to her, refused her request and had Adonijah killed. Now, that would not be the mark of integrity, would it?

Isaiah 57:1 The righteous perisheth, and no man layeth it to heart, and godly men are taken away, none considering that the righteous is taken away from the evil to come. 2 He entereth into peace, they rest in their beds, each one that walketh in his uprightness. (JPS) (Emphasis added)

Isaiah 66:5 Hear the word of the Lord, ye that tremble at His word: your brethren that hate you, that cast you out for My name's sake, have said: 'Let the Lord be glorified, that we may gaze upon your joy', but they shall be ashamed. (JPS)

Solomon broke his word and did not honor his mother’s request. It is interesting to compare this incident to other similar events from the Bible.

Of course, one could observe that, while Solomon could have honored his mother’s request, nothing would have prevented him from executing Adonijah at another time. It is also relevant to consider that it was certainly within the king’s power to restrict Adonijah’s movements among other things if conspiracy was truly a concern. Solomon did this with Shimei.