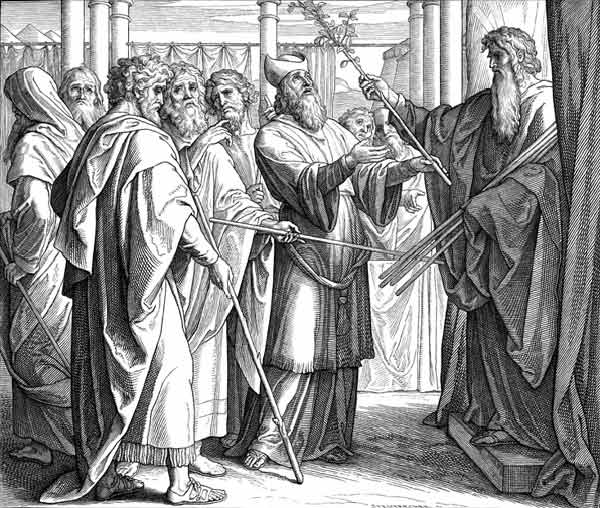 Aaron's Staff that Budded From Die Bibel in Bildern.
Julius Schnorr von Carolsfeld's (1794-1872)
depiction of the budding of Aaron's staff in the tabernacle.

If one looks carefully at the promise God gave to David about a successor, God never told David that Solomon should be the king. In fact, God told David that He would raise up David's successor - one of David's own sons. God never said which son.

1 Chronicles 17:11 And it shall come to pass, when thy days are fulfilled that thou must go to be with thy fathers, that I will set up thy seed after thee, who shall be of thy sons; and I will establish his kingdom. (JPS) (Emphasis added)

This clearly does not say for David to appoint a successor, but that God will establish one. Upon careful consideration of this promise, it becomes clear that David was not supposed to appoint his successor. It is also apparent that David had no intention of appointing one. Furthermore, there is no record that David told Bathsheba that Solomon would be his successor until Nathan approached her with his scheme. In light of those facts, there can be little doubt that the first that Bathsheba had heard of this promise was from Nathan. The first that King David heard of it was from Bathsheba and Solomon knew nothing of it until they anointed him to be the king.

Clarke's Commentary - 2 Samuel 7
Yet, approving the piety of David's intention, God was pleased to reward it by promising that he would make a house for DAVID; which house, to be thus erected by God, was certainly not material, or made of stones, but a spiritual house, or family, to be raised up for the honour of God, and the salvation of mankind. And this house, which God would make, was to be built by David's SEED; and this seed was to be raised up AFTER David slept with his fathers; which words clearly exclude Solomon, who was set up and placed upon the throne BEFORE David was dead. This building promised by God, was to be erected by one of David's descendants, who was also to be an everlasting king; and indeed the house and the kingdom were both of them to be established forever.
(Adam Clarke's Bible Commentary; 2 Samuel 7) (Emphasis added)

After Solomon became the king, David mentions Solomon as God's heir apparent, but from all other signs, one can conclude that he must have assumed that was the way things should be because he was senile during his final decline (1 Chronicles 22:9). Why is there no record of God actually mentioning Solomon in the promise? The reason is because Nathan created the whole scheme to maintain his position and Solomon was not God's choice of leaders. For purely selfish reasons Nathan manipulated Bathsheba and duped an aged an ill king that wished to do the right thing and be a man of integrity. The Bible does not specifically say that David had memory problems, but in view of all of his health problems that are mentioned and what is known about aging, it is likely. There is a general consensus among Bible Scholars that he was senile. Certainly Abishag was not the kind of opportunity that David would or could pass up if he were even moderately functional. It is also highly notable that all of these people had to visit David in his bedchamber to conduct the affairs of the court and this confirms that he was very ill.

What is clear in the story is that Adonijah is seemingly setting himself up to be the king. However, upon careful consideration, one comes to the realization that Adonijah was not setting himself up to be the king, but that this was the successor that God promised David. Adonijah was the manifestation of God's hand at work and his name was not a mistake; he was actually God's choice of leaders. God was raising up one of David's own sons to succeed him. It did not require human intervention or action.

The exact reason that Aaron's staff that budded was not in the ark when they brought it into Solomon's Temple was that Solomon WAS NOT God's choice of leaders. The staff that budded represents God's choice of leaders and Solomon was not God's choice. There could be no clearer sign. Suddenly, we realize that Solomon became the king only through the auspices of deception. Eventually, it will become clear that this deceit was actually a qualification for Solomon's ultimate position.

Isaiah 57:1 The righteous perisheth, and no man layeth it to heart, and godly men are taken away, none considering that the righteous is taken away from the evil to come. 2 He entereth into peace, they rest in their beds, each one that walketh in his uprightness. 3 But draw near hither, ye sons of the sorceress, the seed of the adulterer and the harlot. 4 Against whom do ye sport yourselves? Against whom make ye a wide mouth, and draw out the tongue? Are ye not children of transgression, a seed of falsehood, 5 Ye that inflame yourselves among the terebinths, under every leafy tree; that slay the children in the valleys, under the clefts of the rocks? 6 Among the smooth stones of the valley is thy portion; they, they are thy lot; even to them hast thou poured a drink-offering, thou hast offered a meal-offering. Should I pacify Myself for these things? 7 Upon a high and lofty mountain hast thou set thy bed; thither also wentest thou up to offer sacrifice. 8 And behind the doors and the posts hast thou set up thy symbol; for thou hast uncovered, and art gone up from Me, thou hast enlarged thy bed, and chosen thee of them whose bed thou lovedst, whose hand thou sawest. 9 And thou wentest to the king with ointment, and didst increase thy perfumes, and didst send thine ambassadors far off, even down to the nether-world. 10 Thou wast wearied with the length of thy way; yet saidst thou not: 'There is no hope'; thou didst find a renewal of thy strength, therefore thou wast not affected. (JPS) (Emphasis added)

It is likely no coincidence that this passage of scripture mentions a number of characteristics for which Solomon is noted. It is probable that Isaiah was talking about specific people and events. Recall that Solomon was the product of adulterers, at twelve may have been prone to sticking out the tongue, is noted for hedonism, possibly beneath trees, offered many offerings, built his home on a mountain, sacrificed in the high places, went in before King David to be anointed king by Zadok the priest, received large quantities of fragrant spices from the Queen of Sheba and maintained a fleet of ships traveling far and wide - etceteras. According to the Tannaim Solomon did actually send ambassadors to the netherworld and Hiram King of Tyre was purported to have been one of those ambassadors. Obviously, the entire passage of Isaiah 57 is a direct reference to Solomon and the events of his reign. One will notice in Isaiah 57:5 that there is mention of slaying children and it is known that Solomon built temples to Moloch and Chemosh and sacrificed there. Sacrifice of children was an integral part of worship to these gods.

It is critical to remember that it was of utmost importance that Israel should only appoint the king of God's choosing and that God Himself held the position of king until the people asked for a human king. In fact, Moses gave a warning about being sure to select the right king.

There is actually a great deal of supporting information proving that Solomon was not God’s choice of kings. If he had been there would have been an everlasting kingdom established at that time. If one takes a critical look at the events involving Solomon, it becomes obvious that there is not one single thing recorded about him that should have been recorded about anybody.