Between World War I and World War II, the Allies dramatically reduced the size of their arsenals. This occurred because of feelings of complacency and a complete revulsion for the thought of war. Furthermore, since World War I had become known as “The War to End All Wars,” some allied leaders believed another war was impossible. Since military procurements were reduced to very low levels, the technological prowess of the WWI allies stagnated. 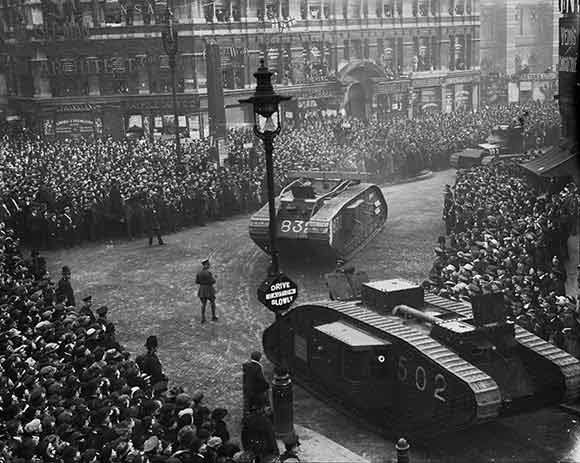 Tanks on parade in London at the end of World War I, 1918.
Photo: Thomas Frederick Scales.
National Library of New Zealand.

On the other hand, Germany, dissatisfied with the conclusion of World War I, secretly began preparations for another war. The German people felt that their politicians had betrayed their national honor at the armistice. Furthermore, the reparations for World War I demanded by the Allies were a great burden for Germany. During the Great Depression, Germany was particularly affected by economic hardship. In hope of relieving the economic crisis, the German people turned to National Socialism, also known as the Nazi Party.

As Adolf Hitler came to power and began militaristic activities, he began to build up Germany's arsenal in violation of the Treaty of Versailles. Despite the provisions of the treaty stipulating that Germany not be armed, he began to increase armament production and even developed many products that could later be used for military purposes as civilian products initially. It will probably never be known if Hitler had his grand scheme figured out by the early 1930s, but he began massive industrialization programs to produce consumer goods. By the time World War II began, these industrial facilities were producing military equipment.

Similarly, Italy was faced with staggering inflation and an enormous public debt during the Great Depression. Many Italians blamed their government for not obtaining more land at the end of World War I. Italians then looked to the promise of Fascism to alleviate these problems. 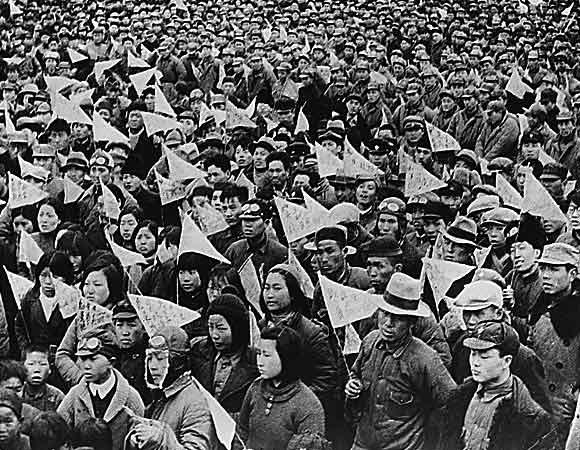 80,000,000 Chinese Communists who inhabit thousands of square miles of Northern China and are ruled, in spite of the Kuomintang (Government of Free China), by Mao Tse-Tung and his Communist Armies. 12/01/1944.
Photo: Franklin D. Roosevelt Library.
National Archives and Records Administration.

Because of the Great Depression, Japan had trouble obtaining materials needed for industrial production. The Japanese then invaded Manchuria in Northern China to acquire the needed resources. Outside of Asia, this was of little concern and no resistance was encountered by the Japanese. Returning to their ancient tradition of Samurai, the Japanese embarked upon a period of expansionism. As Japan increased its sphere of influence across the Pacific, it aligned with Germany and Italy. The alliance of Germany, Japan and Italy became known as The Axis, or the Axis Powers. It is also sometimes called the Tripartite Pact, after the treaty that created the alliance a tripartite treaty.