Although many people in the Western World believe that a form of democracy and some capitalistic features are necessary for all societies to be fair and good, this may not actually be true. It does appear that it is true for industrial nations, but it may not be the best form of government for non-industrial societies. The concept of forcing freedom and democracy onto other nations is preposterous on every conceivable level of rationale. One of the best pieces of evidence that can be used to support the axiom that democracy might not be the best model for every situation is that monarchies have survived very well in nations that are not industrialized. Many of the countries in the Middle East that are not industrialized, and are unlikely to ever be industrialized, continue to have monarchy forms of government. In many cases, it does not appear that these societies are unhappy with this form of government or that it serves them poorly. 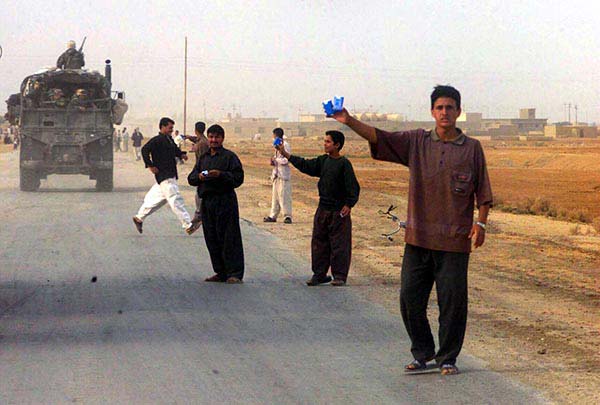 A little capitalism in Iraq as some Iraqi teenagers try to sell cigarettes from the side of Highway 27, to US Marine Corps (USMC) Marines from the 1ST Marine Division (MAR DIV), Division Main, as their convoy passes through the city of Ash Shumali, Iraq, during Operation Iraqi Freedom. 4/2/2003.
Photo: Lance Corporal Jennifer A. Krusen.
United States Marine Corps. Department of Defense.
National Archives and Records Administration.
Still Picture Branch, College Park, Maryland.

Without a doubt, the areas where feudal government structures still exist are some of the most turbulent areas of the world. Widespread industrialization never occurred and is unlikely to ever occur in those areas. Those areas have undergone a great deal of modernization in the past century. In many ways, it seems that these societies have skipped industrialization and jumped directly to post-industrial society in many respects.

Many Middle Eastern countries have substantial militaries and assault rifles are civilian fashion necessities. Nevertheless, their prosperity has made weapons production unnecessary because they can easily afford to purchase weapons from abroad. Could this be why industrialization never occurred there and dynastic forms of government have survived, simply because there is little ordnance production?