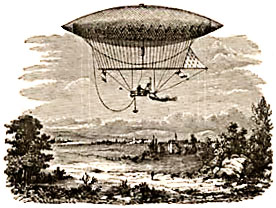 Aerostat a Vapeur de M. Giffard.
Early balloons were not truly navigable. Attempts to improve maneuverability included elongating the balloon's shape and using a powered screw to push it through the air. Thus, the airship or dirigible—a lighter-than-air craft with propulsion and steering systems—was born. Credit for the construction of the first navigable airship belongs to French engineer, Henri Giffard, who, in 1852, attached a small, steam-powered engine to a huge propeller and chugged through the air for seventeen miles at a top speed of five miles per hour.
Lithograph: Giffard Papers.
Manuscript Division.
Library of Congress.
Washington, D.C.

Basic hot-air balloons have one distinct problem in that they float wherever the wind takes them and except for altitude, they cannot be controlled. Numerous Victorian inventors addressed this problem and they tried several ways of steering balloons. Although the steering devices were never very effective for the typical spherical hot-air balloon, a new means of air travel, the airship or dirigible, eventually resulted from these efforts. For a short time during this period, a transitional type of craft that was somewhere in between a balloon and an airship existed.

One of the most promising schemes for steering balloons was to use an engine with a propeller to guide it through the air. The first attempts at this directional control employed steam engines and proved to be extremely cumbersome and dangerous. Additionally, the spherical hot-air balloon had too much drag and lacked sufficient lift, stability and directionality, making it an ineffective configuration for this technique. Efforts to control balloons gradually brought about new elongated designs that could move through the air more easily, were more stabile, and had directional attributes.

In 1852, a French engineer named Henri Gifford successfully added a three-horsepower steam powered propeller to guide and propel an elongated balloon. Gifford's flight marked the first time that a balloon was successfully steered.