In 1766, the British chemist Henry Cavendish discovered, or successfully isolated, hydrogen. This newly discovered gas did not immediately have many practical applications; it was not until 1781 that Italian businessman Tiberius Cavello was playing with hydrogen-filled soap bubbles and discovered that they always floated upwards. This is because hydrogen is the lightest element and it is lighter than air. In fact, hydrogen can escape the gravity of earth and float off into outer space.

J. A. C. Charles, the French physicist famous for Charles' Law, began experimenting with hydrogen balloons about the same time that the Montgolfiers were developing their hot-air balloons. Charles launched his first unoccupied balloon on August 27, 1783. It had taken four days to make enough hydrogen to fill it and it climbed to 3000 feet and floated within sight for more than an hour in the calm atmosphere that day.

Charles first balloon eventually drifted off as the wind picked up and landed about fifteen miles, or 24 km, from Paris where it was furiously attacked and shredded by terrified peasants that thought it was a demonic manifestation. To avoid similar panics in the future, King Louis XVI issued a decree explaining what balloons were, what they looked like and asking that citizens not lose their heads and attack balloons again. 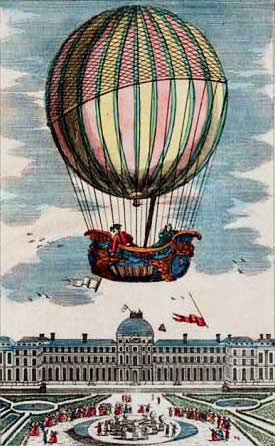 Charles's and Robert's Hydrogen Balloon.
Less than two weeks after the ground-breaking Montgolfier flight, the French physicist Jacques Alexandre César Charles (1746–1823) and M.N. Robert (1758–1820) made the first untethered ascension with a gas (hydrogen) balloon. Charles combined his expertise in making hydrogen with Robert's new method of coating silk with rubber. The “Charlière” exceeded the earlier Montgolfier hot-air balloon in time in the air and distance traveled. With its wicker gondola, netting, and valve-and-ballast system, it became the definitive form of the hydrogen balloon for the next 200 years. The throng in the Tuileries Gardens was reported as 400,000—half the population of Paris.
Hand-colored etching. Library of Congress, Prints and Photographs Division, Washington, D.C.

Charles and some associates made the first manned flight in a hydrogen balloon on December 1, 1783. They traveled more than twenty-five miles, or 40.3 km, in less than two hours. This balloon was similar to modern balloons in many ways. They carried a barometer and thermometer to conduct atmospheric experiments. When they landed, Charles decided that he wanted to fly alone for awhile and his associates then stepped out of the basket. The balloon then jumped rapidly to 9000 feet, and Charles discovered that the air was very cold and thin at that altitude. About a year later, an American doctor, John Jeffries, made the first scientific collection of atmospheric data from a balloon.