British optimists and aviation pioneers William S. Henson and John Stringfellow founded the Aerial Transit Company in 1842 - purportedly a worldwide airline service. They obtained patents for their aircraft, the Aerial, an aerial steam carriage. An early model failed to fly and the partners split up shortly thereafter. Stringfellow continued to experiment with flight and in 1848 managed to get another steam-powered model into the air for a short distance. 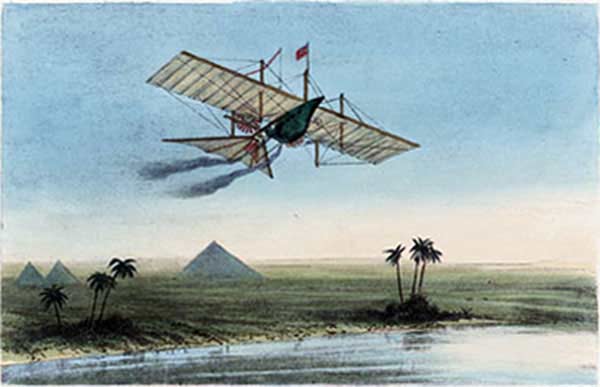 The First Carriage, the Arial.
In this fanciful view published in 1843, the “Aerial” flies over the Egyptian pyramids and looks surprisingly like an early twentieth-century monoplane. Conceived and designed by William Samuel Henson, this design looks as if it actually could have flown. Although unable to fly for various technical reasons, it can be considered the first rational expression of a powered, heavier-than-air machine. Henson is also credited with introducing the modern notion of the pusher propeller.
London: Ackerman & Company, 1843. W. Walton, printer.
Hand-colored lithograph.
Prints and Photographs Division, Library of Congress, Washington, D.C.