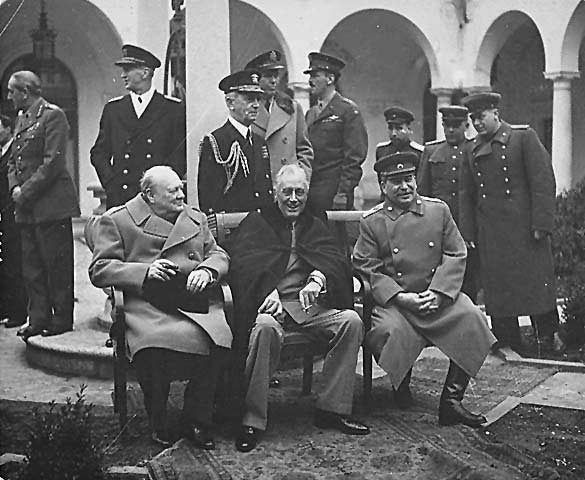 The Cold War can be considered a continuation of World War II, in many ways. In the case of the Cold War, however, it is widely speculated that if the World leaders of World War II had remained after WWII was over, the Cold War might not have occurred. Franklin Roosevelt died in office before the end of the war and Winston Churchill was forced to resign as Prime Minister of Britain shortly thereafter. Joseph Stalin remained but now had to deal with men that were unfamiliar. This is purely speculation, however, and still other historians doubt that this made any difference. One factor that is clear, however, is that all of these men were somewhat autocratic in their positions. It seems that their subordinates were not kept abreast of the affairs of the great leaders.

Unresolved issues from the World Wars combined with a mutual distrust of the world's new leaders in the West led to the Cold War. The proliferation of Communism was the result of the necessity to reallocate resources for the formation of an industrialized society. In fact, industrialization was one of the primary functions of the communist philosophy. On this note, it seems that there was actually more common ground between the East and the West than there were differences, it is just that nobody recognized it at the time.

Methods of the Cold War

The Cold War was a war, but the method in which it was waged is very unique. Primarily, the Cold War was fought on the drawing boards of weapons designers. During the Cold War, the involved nations spent incredible amounts of resources to produce increasingly sophisticated weapons. Some experts feel that the Cold War ended because the western nations were able to appropriate vastly greater resources to military procurements. Because of the technological advancement of military items during this period the societies involved also saw great gains in technological development.

The affect that the Cold War had on the involved societies cannot be overestimated. Most of the great spy and intrigue themes of the period were derived from the activities of the Cold War. In fact, many in Hollywood were concerned about where they would get inspiring material for motion pictures after the Cold War ended. The Cold War created its own social consciousness just as any other major war does.

The military influence on the societies of the world is and generally has been one of the prime movers toward technological advancement and social change. One aspect of this phenomenon is that this influence is nearly ubiquitous and yet frequently unrecognized. Today, many everyday products and services, including the methods and materials used to produce them are the result of military design and development.