Samuel Pierpont Langley, a researcher with the Smithsonian Institution, conducted years of research into flight and had a successful experiment in 1896 when his unmanned steam-powered Aerodrome Number 5 achieved flight for more than 1½ minutes traveling more than ½ miles, or 800 meters. Langley built large airplane models that he called Aerodromes, meaning air runners, and concentrated on developing a lightweight airplane engine.

War gave a big boost to Langley's work in 1898 when the US government granted him $50,000 to develop a flying machine during the Spanish - American War. Langley's assistant, Charles M. Manly, succeeded in creating an internal combustion gasoline engine of radial configuration that developed about 52 horsepower or 39 kilowatts, very powerful for its day. Manly was aboard the craft during two attempted manned flights near Washington D.C. Langley devised a steam catapult to launch the Aerodrome off of a houseboat floating on the Potomac River. Neither flight was successful and Manly nearly drowned in the river during the second test. 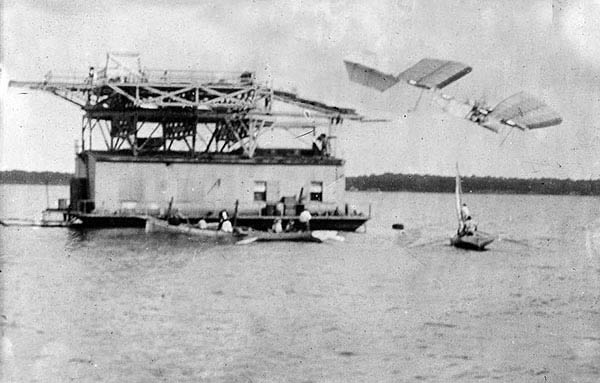 Langley Aerodrome.
Photograph shows the attempted flight of the Langley Aerodrome, on October 7, 1903, which ended when it fell into the Potomac River upon launch. The aircraft was designed by Smithsonian Institution Secretary Samuel P. Langley.
Library of Congress. Prints and Photographs Division. Washington, D.C.